R is a system for statistical computation and graphics. It consists of a language plus a run-time environment with graphics, a debugger, access to certain system functions, and the ability to run programs stored in script files. 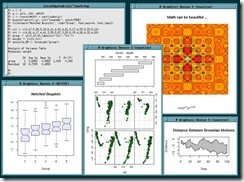 As quoted, the core of R is an interpreted computer language which allows branching and looping as well as modular programming using functions. Most of the user-visible functions in R are written in R. It is possible for the user to interface to procedures written in the C, C++, or FORTRAN languages for efficiency. The R distribution contains functionality for a large number of statistical procedures. Among these are: linear and generalized linear models, nonlinear regression models, time series analysis, classical parametric and non parametric tests, clustering and smoothing. There is also a large set of functions which provide a flexible graphical environment for creating various kinds of data presentations.

RServe is a TCP/IP server which allows other programs to use facilities of R from various languages without the need to initialize R or link against R library. Every connection has a separate workspace and working directory. Client-side implementations are available for popular languages such as C/C++ and Java. RServe supports remote connection, authentication and file transfer. Typical use is to integrate R backend for computation of statistical models, plots etc. in other applications.