In my previous article, Combine Crunch and Lucene for Efficient Web Page Indexing, I mentioned that I used Crunch and Lucene in one of my projects. The project actually aims to build a semantic knowledge framework. As part of the project, I need to do content/knowledge extraction, semantic tagging, knowledge storage and knowledge representation.

I used a combination of various open source tools, which include Crunch , Apache Lucene, Jena (A Semantic Web Framework for Java), Protege, and also GATE.

Here I am going to describe GATE which is a general architecture for text engineering. Actually I have came across also Apache UIMA (formerly IBM UIMA), which is used for Unstructured Information Management applications that analyze large volumes of unstructured information in order to discover knowledge that is relevant to an end user. After comparing the two, I decided GATE will be more suitable for me. 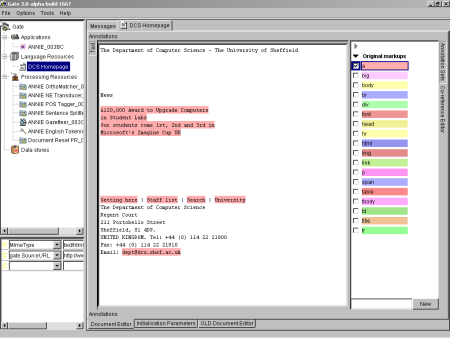 GATE has these benefits for scientists or developers performing experiments with language and computation.

The various scientific and engineering disciplines to which GATE is relevant are: